Home / Organisation Scaling Agile with Tribes, Squads, Chapters and Guilds. Is this the ICT organisation of the future?
|  4 Comments
|  Categories: Organisation 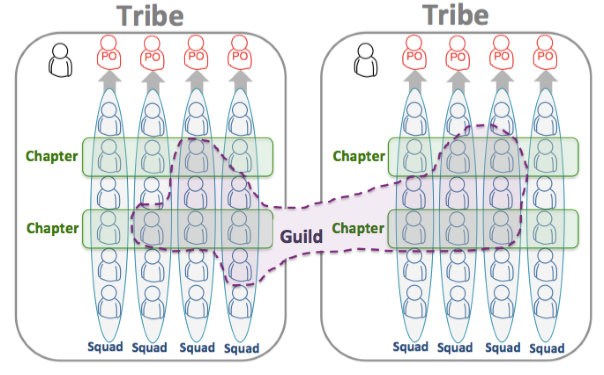 Many large organisations are increasingly looking at Agile methods for undertaking software development and in some cases both software development and ICT infrastructure deployment. This is being driven by virtualisation technologies, i.e. Cloud. Where traditionally a specific technology domain was represented by a set of software and hardware components it was relatively straight forward to specify individual projects as there was a common team of people familiar with the domain. Virtualisation is changing this model as new skills are demanded for cloud based deployments and the integration of software over such technologies. The role of the traditional Project Manager risks fading into the sunset by the broadening of responsiblilties of the Scrum Master. I had recently been involved in consulting to a large Australian telco on a 5G transformation program and had been researching what organisational models other Telco’s had been adopting. The issue is that there are no definitive models out there from the telco industry. Organisations that develop large scale software applications such as Spotify are better references. Spotify’s model, which was first published in 2012, is still being used as a reference for large scale Agile. A recent paper by M Alqudah and R Razali which reviewed Agile scaling methods included Spotiy’s method among the 7 methods reviewed. (ref. International Journal on Advanced Science Engineering Information technology Vol 6 No 6 2016).

4 thoughts on “Scaling Agile with Tribes, Squads, Chapters and Guilds. Is this the ICT organisation of the future?”